When Mom and Dad picked him from a litter of border collie mixes, he was tiny. He grew up fast, lean with beautiful markings, soft brown eyes and plenty of energy. He loved to fetch balls and frisbees, though he never quite got the hang of catching them in midair, and he never wanted to give them up once he had them. He’d try to keep them all, piling balls and frisbees in his mouth and carrying them to his favorite perch on a log near the picnic table in my parents’ backyard.

Then he got sick.

It seemed to be an allergy. Rashes broke out all over his body. He went on medicine, prednisone, and that made him hungry. He went from being a picky eater to wolfing down anything he was given and begging for more. But the skin problems didn’t go away. Mom tried everything: special baths, changing his diet, tearing out her carpet…nothing worked. The prednisone was all that kept the rashes in check, and then only barely.

Sam lost a lot of his energy and started spending more time lying around, less excited about going outside. When I saw him at Christmas, he was constantly leaking fluid from his eyes and had a smell. He didn’t move like a puppy; he moved like an old dog. He’d been that way long enough that I didn’t realize how strange it was until Dad mentioned his age to me.

After I went home, Mom called to tell me Sam had been diagnosed with diabetes. It was pretty bad. They started him on insulin immediately, but it don’t seem to be doing anything. Even if it had, Sam would still have his skin rashes, compounded by the fact that he could never again have prednisone, as it was the likely cause of the diabetes and would exacerbate the disease.

Five days passed. There was no change. He couldn’t get up. He was pooping himself and throwing up whatever he tried to eat.

Mom and AJ took Sam to the vet.The doctor mercifully came out to the van so Sam wouldn’t have to go inside. In a few moments Sam went to sleep for the last time.

That was December 31, the day before yesterday. Somehow it all feels unreal to me. I wasn’t there. I didn’t see it. I didn’t even see Sam’s sickness get bad. The last time I saw him, I thought he was okay, maybe a little uncomfortable, but not that bad. It seems so strange to me that in just a few days he would take such a turn.

I last saw him on Tuesday, December 25. He was unable to get up by the weekend. And he was put down on Monday, December 31.

And he wasn’t an old dog. He was basically still a puppy. I was so used to old dogs that his old dog behavior must not have registered. But he wasn’t old. And he never got the chance to be old.

Like AJ told me, he had a lot of things wrong with him, and we didn’t catch them all in time.

I don’t know if we even could have. Mom says the vet thinks Sam might have had “bad genes”, especially given the fact that our other dogs lived to ripe old ages.

If that’s the case, if it was all just luck of the draw, then what a terrible hand to be played. Our sweet Sammy deserved more of a life than that.

But he did live a life full of love, surrounded by people who loved him, getting spoiled, eating snow, playing with frisbees, enjoying big hugs and pets, shaking hands, barking on command, curling up on the pet bed in the family room, playing with squeaky toys, running down the stairs to see AJ or go outside, sidling up to Dad’s couch, snuggling up under Mom’s desk, chasing the cat, standing right in everyone’s way, begging for scraps, bolting across the yard after cats or visiting grandchildren.

I loved to wrap my arms around that big boy and give him enormous hugs, and stroke the hair on his head and scratch him behind the ears, and hold his face and kiss him on his doggy cheeks. I loved how excited he always was to see me and how he followed me around the house. I loved that he was a sweet, good boy who loved me and my parents. I loved how much joy he brought to my parents’ life.

He’s gone and there’s a hole. There’s just a hole. 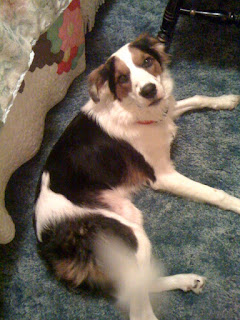