Today I decided to cut my hair.

I had been getting tired of how long it was, how it kept getting in the way (and also getting in my butt). So when I got out of the shower I dried off but left my hair wet and asked Sean to chop it off for me. When he’d cut it to just past shoulder length, I trimmed what I could see to make it even in the front. It actually looks pretty decent.

Work went fine. A bunch of meetings and discussion. After work I lay down in bed with Sean (no euphemism) and napped for a bit. Then I got up and started making dinner (roast, mashed potatoes, peas). We watched NCIS again while we ate. And that was pretty much the day.

The other day at work, I was standing at my desk when a coworker walked by.

“Your hair is getting so long and pretty, Heather!” she said.

Today, also at work, I was looking in the mirror in the bathroom and running my fingers through my hair, and another coworker made a comment.

“Wow, your hair is really getting long! Are you just going to let it grow?”

“Yeah,” I said. “It’s gotten to here before–” and I touched the small of my back “–but not really any further. We’ll see.”

Right now my hair is about half a foot above the small of my back. It certainly has grown quite a bit since I whacked it all off in June of 2012. Here’s how long it was before the haircut:

I then had it cut short and dyed:

The dye didn’t really last that long. It was already fading two days later. By August my hair was basically back to its regular color.

August 2012 was when I started as a contractor at my current place of employment, so my coworkers met me with short hair. (They also met me post-weight loss!) Here’s how I looked then:

I kept my hair short, for a few months at least, before I let it grow again. Here I am in December of 2012:

By August of 2013 my hair had made it past my shoulders:

In January of 2014, my hair had reached what I guess you’d call “mid-length”:

And then my hair suddenly looks super long in August 2014:

I’m way behind on uploading photos–backlogged to November, and that’s not counting the Hawaii photos from March and the St. Augustine photos from August!–but here is an adorable picture of me and Sean that Mom took at Christmas. This gives you an idea of the length of my hair now: So yeah, my hair is pretty long, eh? It’ll be interesting to see how long it gets!

For some time now I’ve been trying out the “no ‘poo” method of hair care. Rather than using shampoo, you wash with a paste made of baking soda and water, and rather than using conditioner, you simply rinse your hair with diluted apple cider vinegar. I got the idea from my friend Mari, who has been doing it for years and loves the results. My own experience has been a little uneven, however.

The main purpose of going no ‘poo is to allow your hair’s natural oils to come out. This should, in theory, make your hair prettier and more manageable. It’s also supposed to be healthier for your hair, since you aren’t stripping away natural oils and then applying unnatural products.

My hair is long, straight, and naturally blond. I have never really done much with it. It can’t hold a curl for more than an hour. It’s very convenient, in that I can simply wash it and go, but I’ve often despaired of how flat it is. I was hoping that going no ‘poo would add some body.

It took some time for my hair to adjust to the baking soda and cider method. Once it did, I noticed two improvements I really liked. First, my hair no longer seemed susceptible to static electricity. It lay flat and was easy to move without worrying about tangling. It also held its shape better, meaning I could give the appearance of volume by brushing it up in the front and then allowing it to fall. I was pretty pleased with these changes. While my hair wasn’t actually thicker, it felt more manageable.

However, there were a few problems. The first problem: Sean didn’t care for the smell of my hair while I used this method. Frankly, I didn’t either. It didn’t smell dirty, but it didn’t smell pretty, either. I suppose this problem might be fixed with a spray-in fragrance, or perhaps a lemon or scented oil as I’ve seen suggested on no ‘poo forums, but for me, fixing baking soda paste and diluting cider is already more fuss than I normally feel like doing. I’m not particularly girly; I like to look nice, but I don’t want to spend hours in the bathroom each morning.

The second problem: My mom told me my hair didn’t shine like it used to–that it looked dull. This was very disappointing to hear. I could almost deal with the smell issue, but if my hair isn’t going to look good, what’s the point? I don’t have cascading golden tresses or anything, but I like to think my hair is fairly pretty. I don’t want to sabotage a facet of my looks that I’m perfectly happy with.

A third problem is simply the issue of getting a thorough washing. Baking soda works all right for cleaning hair after exercise, but when I tried it after swimming in the ocean or a chlorinated pool, my hair did not get clean. Chlorine is similar to baking soda, so it was actually recommended somewhere not to use the baking soda at all, but to simply rinse the hair before and after swimming, or to use a bathing cap, something I don’t own and have never used. Again, more fuss.

My no ‘poo experience ended when I went to New York state recently. While there I didn’t feel like taking the trouble to find a store and buy baking soda and apple cider vinegar, so I simply used hotel shampoo and conditioner. And let me tell you, it felt so good to actually lather up my hair again. My hair felt nice and clean and smooth afterwards, too. The no ‘poo method changes the texture of hair, makes it more oily. Maybe that’s better for it; I don’t know. All I do know is I’ve used shampoo and conditioner since I’ve been home, and I’m loath to give them up again, despite the fact that I can already feel my hair getting thinner and frizzier.

Neither option seems ideal at this point. I wonder if there’s a happy medium out there somewhere. 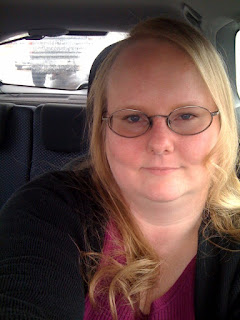 She put a crazy part in and curled it with a flat iron.