In a freakish coincidence, while complaining about cords being strung all over the living room, I tripped over one.

The incident underscores my general unhappiness with our apartment’s layout. I’m tired of it. It’s boring. The floor plan is a straight shot from the front door to the back door, with minimal natural light and no separation of the living and dining room areas. Sean’s computer is in the living room, and he often connects it to the TV, meaning cords are strung all across the room and computer components are everywhere.

I’d like our apartment to be functional and cozy, easy to clean with a place for everything. I want Sean to be able to use his computer comfortably without his stuff being strewn hither and yon.

Right now Sean’s computer is on our kotatsu, a low Japanese table I bought when we first moved here, thinking it would serve as our dining table. Sean took it over pretty quickly and it’s been his “desk” ever since. But lately, as I said, he’s been using the TV for his monitor and sitting on the couch. The other day I asked him why, and he said the couch was more comfortable.

I decided to try and find a way for him to sit comfortably without taking over the living room, and the first thing I thought of was putting my large desk out in the living room and giving Sean a proper chair. As I was describing this idea to him, I started stepping away from the couch…

It’s almost comical. “I hate having wires all over the living room. Let me demonstrate my point!” I didn’t do it on purpose, but the coincidence is ridiculous.

Oh well. At least his computer still works, and he has another USB port he can use. I’m not sure a good solution to the living room arrangement problem will come easily, though. We’ve lived here four years and I’ve rearranged several times. I’m not sure I’ll ever be happy with it. 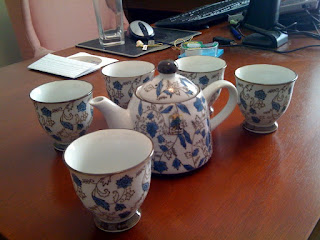 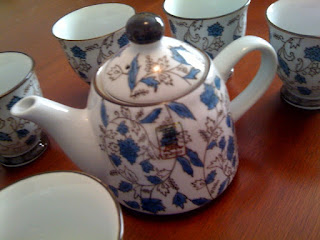 I got this at Hibari Market in Lexington, Kentucky on my way home from spending Christmas with my family. I hope to shift my home office to a blue scheme, so this will match perfectly!

Today I spent some time rearranging the second bedroom, which has multiple uses: guest room, office, and general storage facility. I want it to also serve the purpose of a workout room, so I was trying to clear a decent amount of space in front of the television. I was marginally successful; you can see pictures here. (Note that I do someday plan to put the Christmas decorations away…)

Doing that put me in the rearranging mood, and I decided to start thinking about how I want the living room to look. I found a floor plan of our apartment at the rental company’s website and, armed with my trusty tape measure and Photoshop, added in all our furniture. Here’s the current layout:

The big purple block is our couch, and the gray boxes in front of it are Sean’s area. (Light gray is the floor where he sits; dark gray is the kotatsu.) The red blocks are the loveseat and chair, and the long, darker red rectangle is the coffee table on loan from Brooke. The big black rectangle is the TV, the big black square is the dinner table, and the smaller black boxes are the bar table and its chairs, the media cabinets, and a file cabinet.

It’s actually a pretty decent layout, given the awkward utility closet jutting into the room and all the doors I have to work around. I really like the way it looks. However, it’s inconvenient in a couple of ways. First, Sean is facing the back wall and not the television. This wasn’t really a big deal before, but lately he’s taken to sitting in my seat (the loveseat) to play video games on the TV, only to have to move when I get home. Secondly, having Sean’s sitting area right in front of the largest couch means a lot of sitting area is wasted. No one who comes over wants to squeeze in and sit behind him, so the couch is limited to perhaps one seat, rather than three or possibly four. I am also somewhat unhappy with the placement of the bar table in the dining room; I kind of like it, but it annoys me that the stools aren’t next to it, and it isn’t serving its normal purpose.

So for about five hours I’ve been rearranging colored blocks, trying to discover a better arrangement. Here are the phases I went through:

Phase One: Too Awkward

This kind of works, but the loveseat is facing a chair that is at a 90 degree angle, which is bound to look ridiculous. Meanwhile, the chair is floating in the middle of the flow of traffic.

I thought maybe putting the TV on the opposite wall would help. It’s a neat idea, but ultimately results in a Family Circus-style path through the apartment. I kind of liked the thought of having an artificial hallway leading to the bedroom door, but it’s not really practical and possibly unsafe.

Perhaps, I speculated, giving up on 90 degree angles would do the trick. This is the result. Ultimately the seating problem still exists and most of the seating has a very poor view.

What if I used the TV as an artificial wall? Well, someone would knock into it, of course…especially given the small passageway between it and the loveseat. I liked the effect this closing-off had on the dining area, but that’s about it. There still wasn’t a very homey feel, and few decent views. Plus, Sean was probably too far away from the TV.

But then, finally, I came across this arrangement:

I’m not perfectly happy with it, but it feels like this is the best I’m going to be able to do. The TV stays where it currently is, to keep it in sight of most of the room. The loveseat rotates 90 degrees and moves to the corner; Sean slides up next to it, leaving enough room for him to walk around and for people to sit. The full couch becomes my seat, with the coffee table in front of it and plenty of room for others to sit, and then the chair rounds out the room, leaving an open area for the bar table. Sean’s file cabinet ends up next to the loveseat and becomes a much-needed end table.

What’s nice about this is that the flow of traffic isn’t changed; people can walk in a straight line from the front door to the back door, which is optimal with this floor plan. I don’t really like how the TV looks right now, but once we get a table for it I think it and the media cabinets will fill out the wall better.

Of course, I haven’t actually moved anything yet…I’m so exhausted from thinking about it that I think I’ll just relax for now ;)

Here it is: the second best possible configuration for my office. (I can’t do the first best configuration because the cables and internet jacks are all on the wrong side of the room.)

View from the door leading to the north side of the building. Speaking of wires…I’m thinking of covering them with a curtain.

View from the door leading to the south side of the building.

View from that same door, looking straight over my desk.

View from the north side door again.

So far I really like the new layout. People have plenty of room to walk, and I don’t have people coming up behind me all the time. I think this’ll work!

Even More Previously: Transition and What can I say, I like moving furniture.

At first I shared the office with a full-time graphic designer. Nowadays I have the office to myself, except when various people come in and use the graphics computer.

When that change first happened, I rearranged the desks like this:

This was okay for many months. I really liked having the extra work space that the second L-shaped desk gave me. However, the room was really cluttered, and I felt I could do more with the space if that second desk was taken out. I ended up trading it for my boss’ old desk, and I put the graphics computer on her desk rather than the flimsy white table it had been sitting on. Everyone was pleased to be using a real desk at last, and I was happy that the room was more open. You can see that layout in this movie I took at Christmas time, and in these two pictures:

However, the loss of the arm of that second L-shaped desk eliminated what I considered to be useful privacy. Now I had people coming up standing behind me all the time, which was the last thing I wanted to encourage. It’s just not feng shui.

So I spent a few months pondering what sort of furniture arrangement would make it so that people wouldn’t stand behind me, and also allow better traffic flow through the office, since it’s essentially a hallway these days. Finally I drew up a floorplan of the room using the ceiling tiles as measurements, and that enabled me to move things around without actually moving them…so I tried lots of different arrangements that I hadn’t considered before.

That led me to this work-in-progress:

It may not look like much in the pictures, but I got it rearranged a bit more after I took them, and I think it’s going to be pretty sweet when I’m all finished (and I’ve had a chance to dust, yeesh). Only time will tell if it’ll keep people from coming up behind me, but the idea is that the arm of the desk pointing towards the door will create the feeling of a hallway, so that people won’t turn left and come into my desk area.

What’s great about this layout is that there is a much wider path to walk through the office. I’m thinking it will work out pretty well.

Edit: I just realized you can’t really make out the door I’m talking about in any of the new pics. It’s to the left of the CD shelf. You actually do see it in the second new picture, but it’s hard to tell that it’s a door :>

(That gray strip alongside it is not the door frame; it’s a shadow due to the fact that the wall juts out behind the door, causing the door to only open about 90 degrees. The reason for this is there is a water fountain on the other side of the wall. And Now You Know.)

I went shopping for clothes today. So obviously I came home with a table and a fake orchid ;>

It all started at Cato, where I actually did get some clothes. But when I went to Target on the recommendation of Lisa at work, I remembered why I never buy clothes at Target: the women’s section and the maternity section are essentially the same, and I don’t want to buy maternity clothes by mistake :P

But I did enjoy wheeling my cart through the furniture section, and it was there that I found my beautiful table and orchid, along with some mirrors, a shiny red tray, and a little lamp.

Okay, so I’m compulsive. But I love the way that bit of wall looks with that little table on it. So…finished. :)

These are the best I could find, but none of them is quite right, either on its own or with my beautiful table. Gah!